Welcome to my first article! This article will discuss game loop theory and implementation. This should be valuable if you’re new to game programming, useful if you’re working on a game engine, and might be interesting even if you’re a seasoned programmer! I’ll touch on the common implementations, add functionality to them, and introduce new concepts! (I think?)

What is the game loop?
Simple! The game loop is the difference between programming a picture and a game. A game loop does three basic things: notify the game that there’s user input to handle, the game should update the state of it’s objects, and the game should draw those objects to the screen. Here’s an example:

Variable and Fixed time step
This example is a simple and commonly used game loop implementation; It’s referred to as a variable time step game loop. What this means is, it progresses it’s game state through the update call based on the number of seconds that has elapsed since the last update call was made. To move an object’s position with this method would be as simple as:

This is often sufficient for many games, but it has several drawbacks:

So what alternative is there? Meet fixed time step. Fixed time step will ensure the update method is called X times per second, every second. This leads to more predictable behavior, and can simplify the update logic (no need for elapsedTime if it’s always the same!). A simple fixed time step game loop looks something like this:

That code will ensure handleUpdate is called X times per second, however there is a risk:

You can expand on this implementation a bit further and add a drawInterval if you wanted. This would be useful if you wanted to let the Game thread sleep a few milliseconds to let the processor have a little break.

Now, onto the code! Firstly, let’s define what a game is:

Based off of this, all you would need to do is implement this interface, and you’re ready to make a game! But you may be thinking, where did GameInput and GameState come from?

Defining Game, GameState, and GameInput
GameInput is a simple class I made that listens to input events from an AWT component. I broke this out into it’s own class for a very important reason! AWT has a separate thread which handles input… this means you could press a key and it would notify your game, potentially changing a value in the middle of an update. If you’re thinking that’s unlikely, you’re very wrong! This class adds the events that occur to a thread-safe queue to be processed in the input method. Once the input method is finished, these events will be cleared to prepare for the next update call. Here’s what the GameInput class offers:

The GameState class. GameState stores information produced by the game loop such as elapsed time since last update, and a couple variables used for drawing:

Pretty straightforward. The onStart method is called before the game starts, this will initialize any variables in the GameLoop implementation. The onLoop method is called in the main loop of the game, and it handles calling the input, update, and draw method on the game passed in. This method returns whether the draw method of the game was called, to let the game thread know to update the screen.

So now our game loop has turned into this:

Of course there’s something going on here you don’t see, what’s the GameState doing when we call setElapsed and tick() ?

Ahh, it looks like we’re done here! Well, I use this game loop type frequently and I occasionally have a problem… sometimes If I do something that takes up a lot of time but only for a single frame, the next elapsed time is huge. This causes problems for sure, but there’s a simple solution:

Now on to the more complicated game loops: fixed time step. There are two I want to cover: GameLoopFixed and GameLoopInterpolated. These game loops could be implemented simply, but to do it right can be tricky!

With these variables, we can implement GameLoopInterpolated

Oh boy that’s a lot of code all at once, let’s break it up:

Simple enough, just tracking how much time has passed by

Ah okay, if the time is greater than the interval and we haven’t called update too many times in this loop, call input and update.

Checking if the game is no longer playing after input or update will help us avoid unnecessary rendering, and will ensure the game is quickly stopped.

Decreasing time by the frameRate ensures accurrate timing. A nieve implementation would merely set it to zero.

What’s this? This has to do with smooth drawing, and will be covered in more detail later!

And finally we draw (and yield potentially). Not too bad.

And the onLoop implementation:

I’ll let you figure out how that works, it’s very similar to GameLoopIntepolated.

Smooth drawing technique
Onto the final topic, smooth drawing! This is a technique you only need to do for fixed time step game loops, since you are drawing more than you are updating (in most cases). Without smooth drawing your objects will skip across the screen, it’s an ugly sight (unless you have high update’s per second, you MIGHT not be able to notice it).

The typical smooth drawing algorithm is called interpolation. Your drawing calculations look like this: 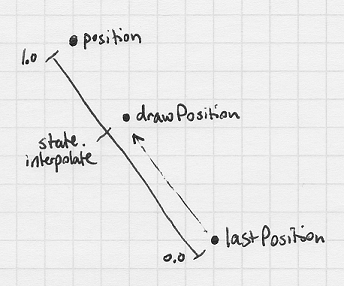 The next drawing algorithm I call backward extrapolation. The drawing calculations look like this: 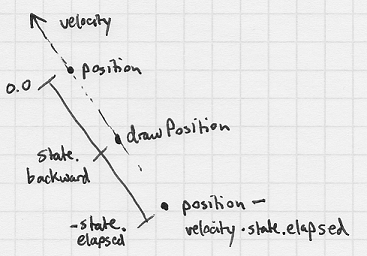 The final drawing algorithmm I call forward extrapolation. The drawing calculations look like this: 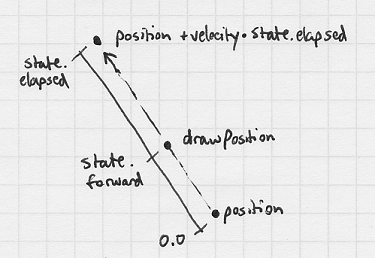 Overall I don’t have a preference between these three algorithms, which one you use is dependent on the game type. Once you define your update rate and draw rate goals, picking the smooth drawing algorithm that looks the nicest for your game is the next step!

I hope this helps you! The example code is available to download, and there is an applet you can expirement with. The applet lets you change your game loop implementation while the game is running, and you can toggle through the different smooth drawing methods to see how they perform.

If you have any questions, please ask away!

The update and drawing code presented here uses what’s called Euler integration.  Other integration methods like Verlet and Runge-Kutta (RK4) could be used and subsequently you could develop a better smooth drawing algorithm for those integration methods (one that doesn’t result in penetration and is visually more accurrate to the current state of the game).

The code was written in Java and uses Java2D for drawing. Java2D was chosen because it is part of the Java SDK and it doesn’t require any external libraries. This code is easily translatable to other languages and other graphics libraries.

In the next article I’m going to talk about managing game entities. Managing (updating & drawing) lists and layers of game entities is non-trivial to the beginner, and could be improved upon even for the experienced. This article will go over a quick method that has no overhead when adding and removing entities to and from your game.